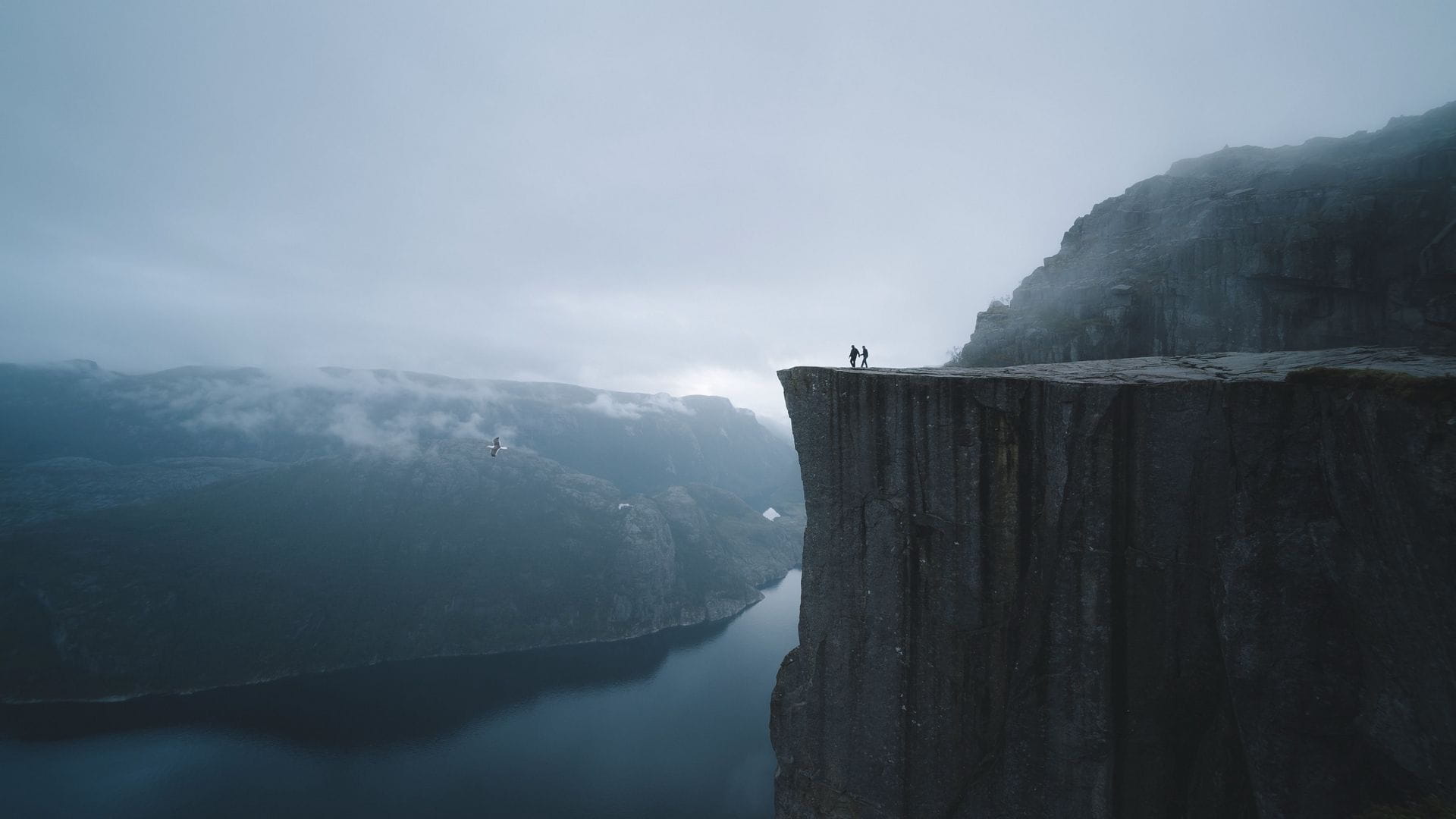 Photo by Valdemaras D. on Unsplash

Most of the people on Erasmus in Poland went to Norway and other northern countries, but generally visited the capitals. The biggest reason for this is that there are very cheap round-way flight tickets from Gdansk to the northern capitals. I am curious about the natural beauties of many countries than the city because I think that I have seen enough capitals in Europe. Therefore, I wanted to go to another place, not Oslo.

As everyone knows, one of the first things that comes to mind in Norway is its famous fjords. I searched for hiking places because I wanted to see that fjords from above and there were three magnificent hiking places in my head: Trolltunga, Kjerag and Pulpit Rock. The Trolltunga would be a tough experience and we do not want to push ourselves so much. Two of them were left behind. We had to fly to the nearest city to go to that hiking places and that city was Stavanger. We said we should start seeing these beauties, and we got the flight tickets to that southwest city. This time I had 2 traveling companions with me, Ceren and Yusuf. We have been there between 20th and 23rd of May. We were all a bit disappointed when we learned that Kjerag is closed till June 10th :/ However, it was an amazing trip!

We were lucky again because we had found host. On our first day, we arrived at Stavanger airport at noon and our host took us from the airport to the city center. Then, we started to walk around the city center. First, it’s not a big city for sure! Half day is enoughto visit almost all of it. We strolled the old part of the city and there were white houses, lush flowers and cobblestone pavements. 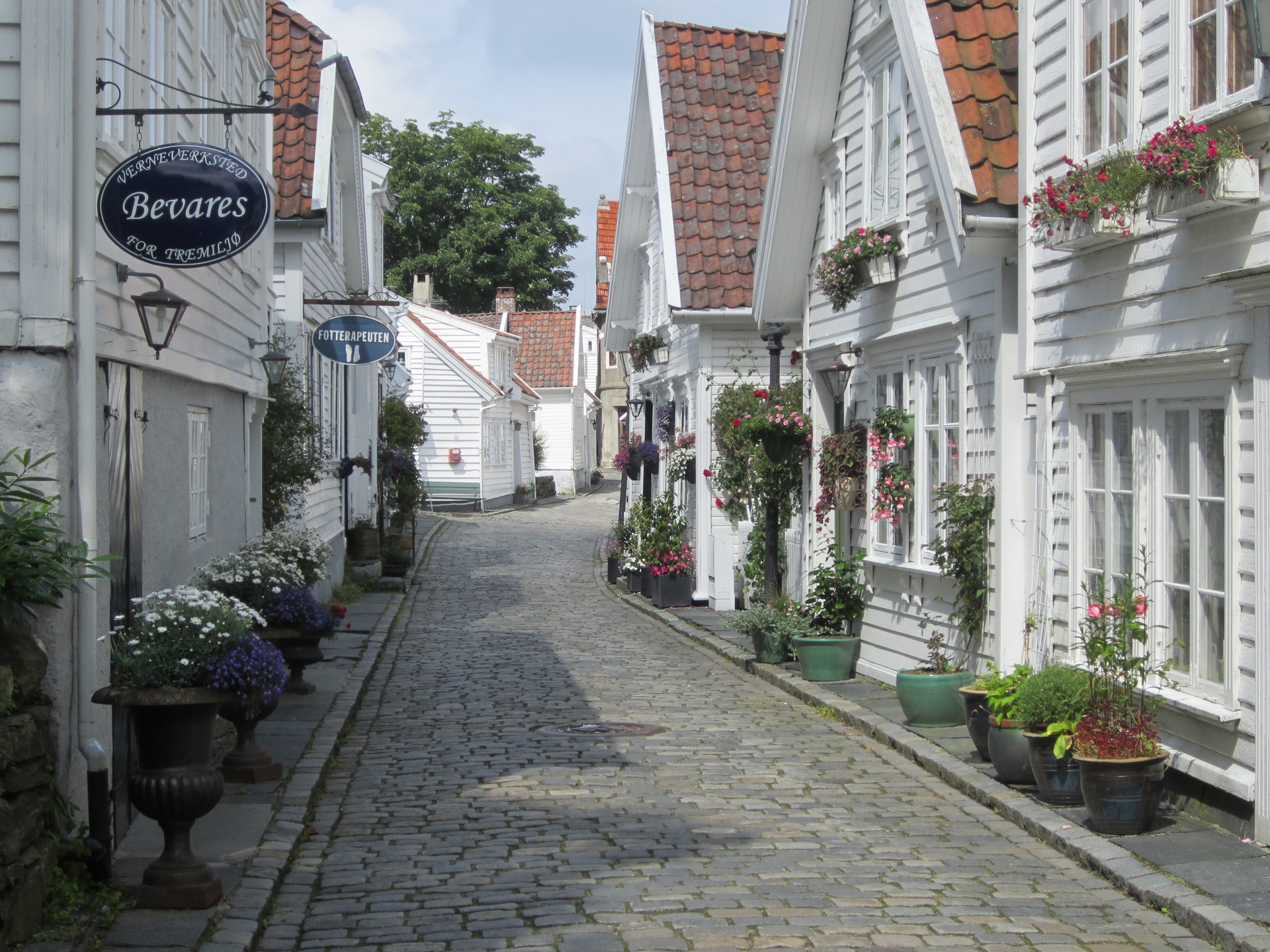 Then we went to Øvre Holmegate, the famous colorful street. There are many cafes, pubs and also colorful houses in this street! 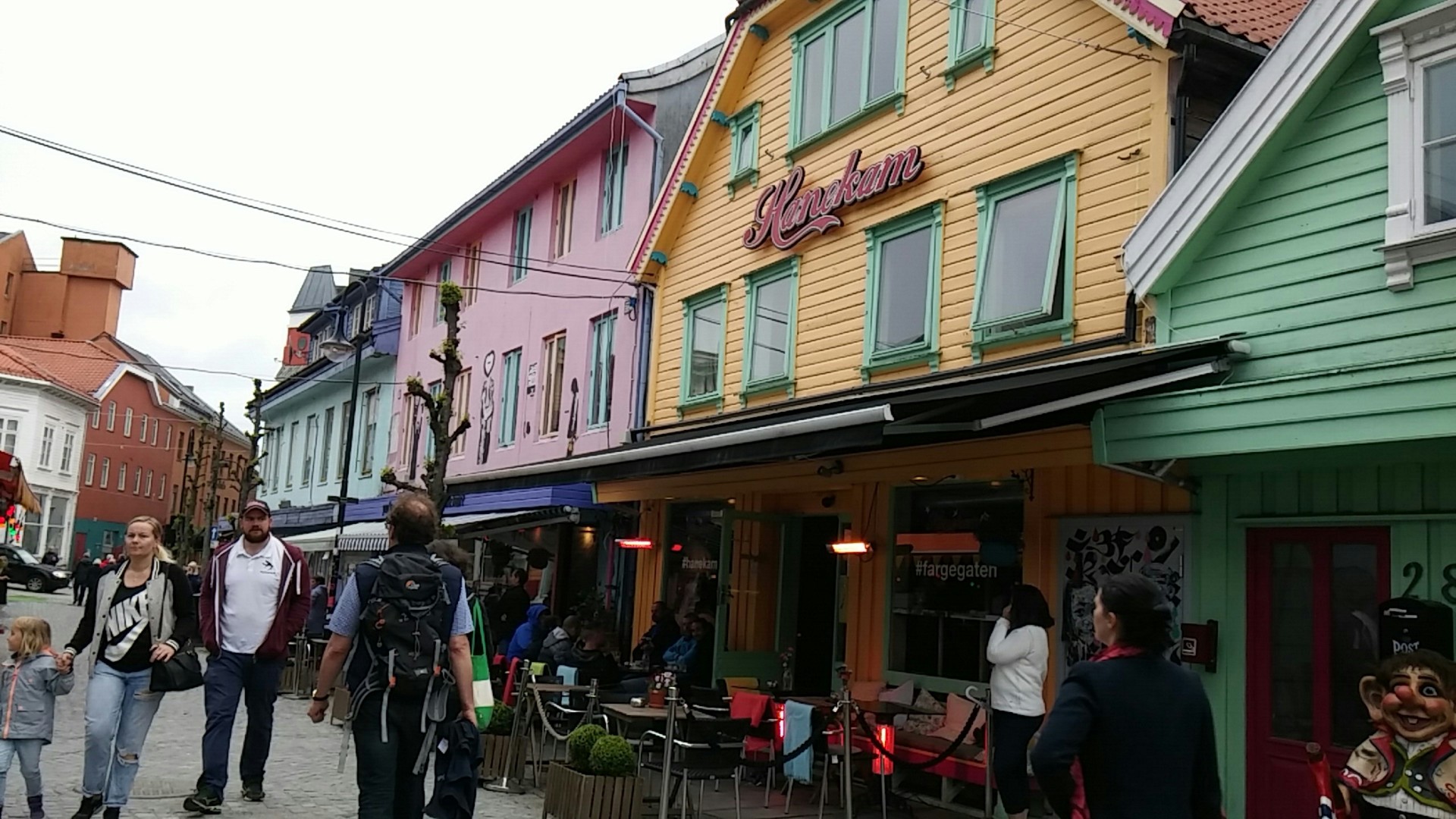 Apart from these, we also visited the other places that should be seen like Stavanger Cathedral, Valbergtårnet, Petroleum Museum. Then, we kept the way to our host's house. The house was on the island of Rennesøy and we saw the rural life of Norway as soon as we arrived. Because, every house has gardens and a few of them have farms. We saw numerous sheep around the house. We had dinner together while having an enjoyable conversation about Norway, Poland, Turkey and other issues.

For the second day our plan was to go to Preikestolen(Pulpit Rock) but there was no bus in the early morning hours. Our host did us one more favor and left us on the ferry stop. For going to hike start point, you have to use ferry and then bus. A few companies in front of the station were selling bus tickets and we got our tickets for 21-22 euros for two-way. For ferry, tickets are sold inside of it and two-way tickets are about 11-12 euros. After traveling 20 minutes by ferry, we got on the bus and traveled 45 minutes more. Finally, we were at the start point of hiking. 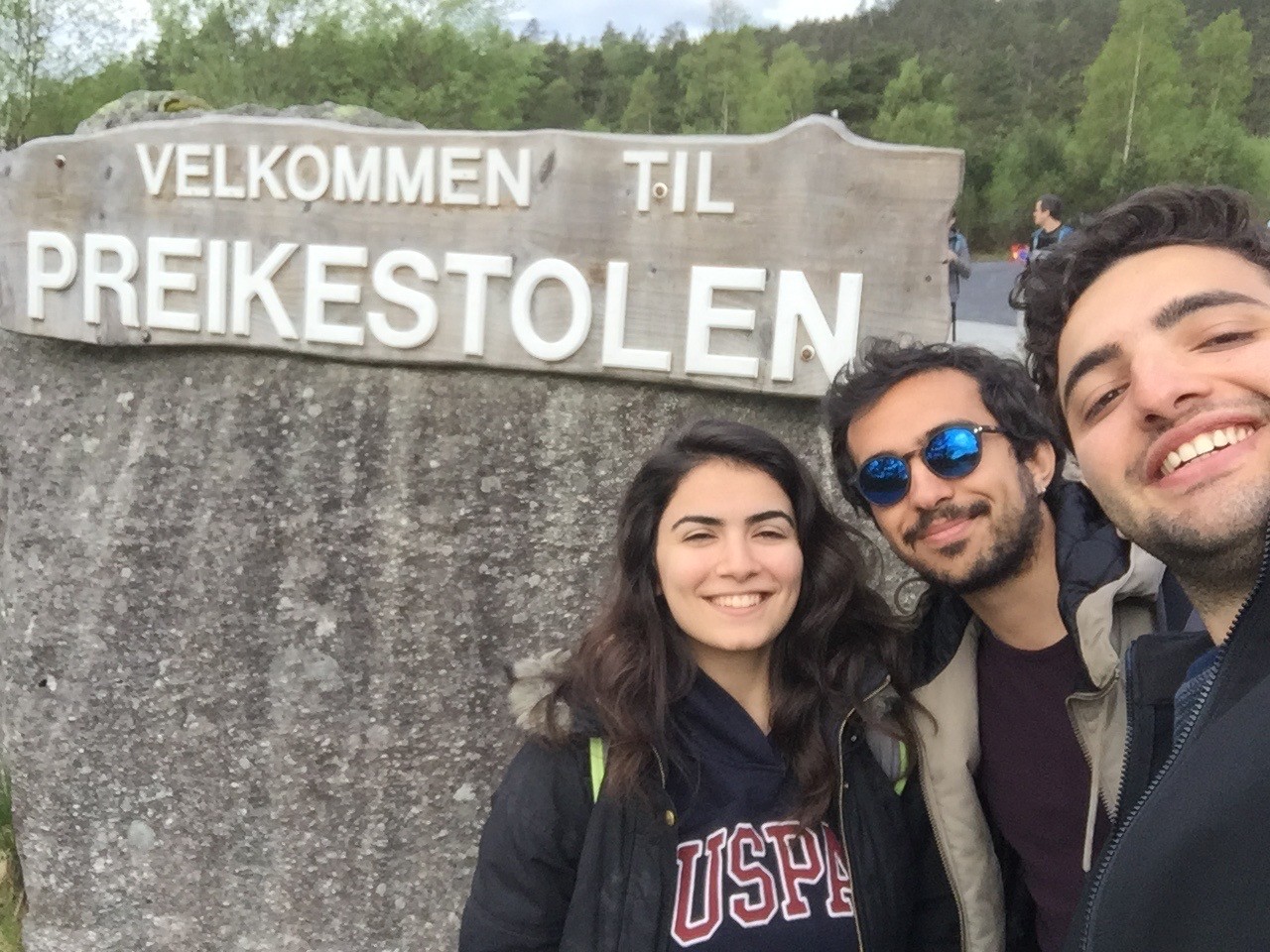 To reach Pulpit Rock you need to hike 2-2. 5 hours. It is easy to hike. Therefore, you don’t need to be experienced. There were many children and old people, who hiked with us. When you check these pictures below, you will have more information about the path : 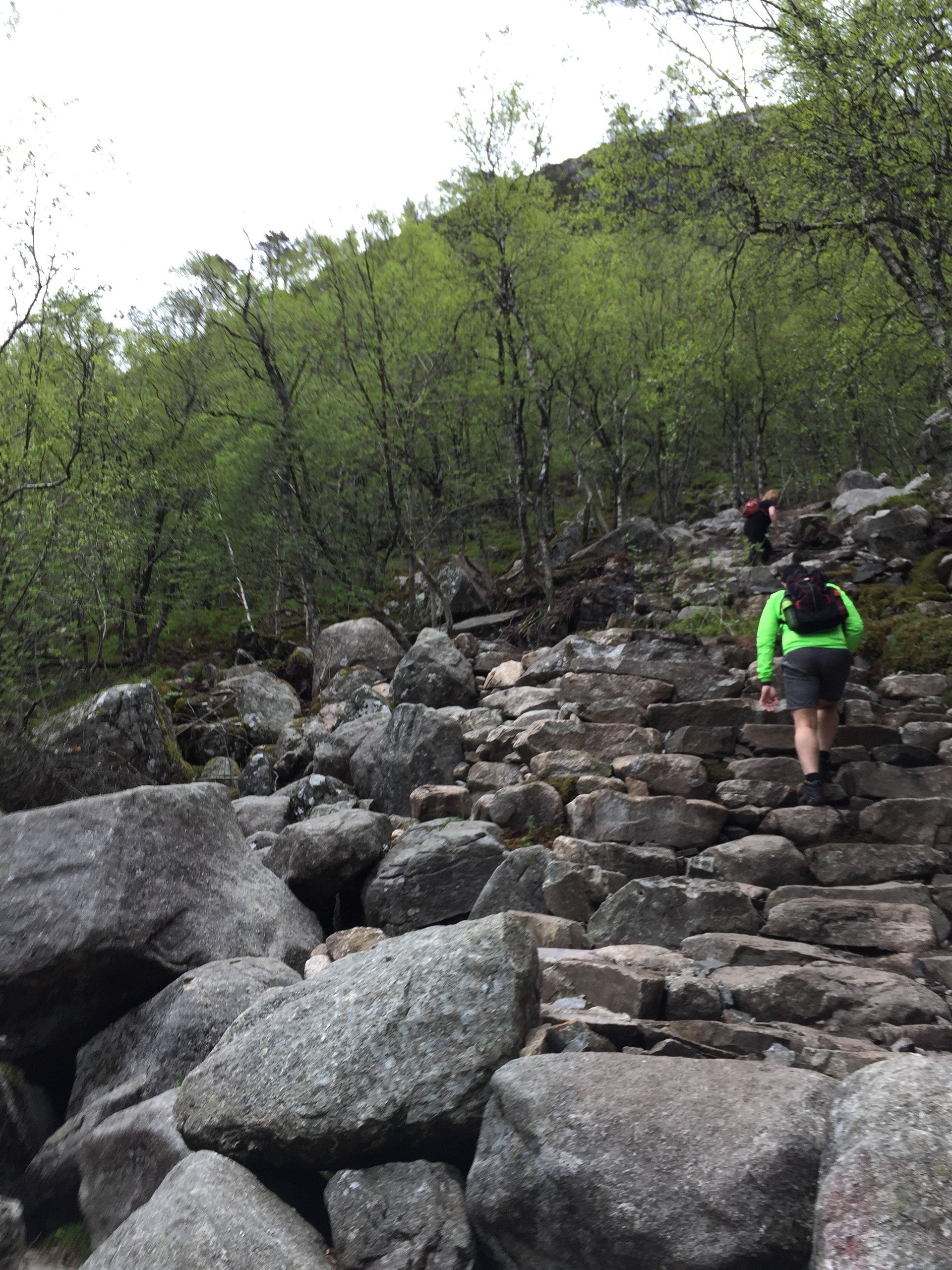 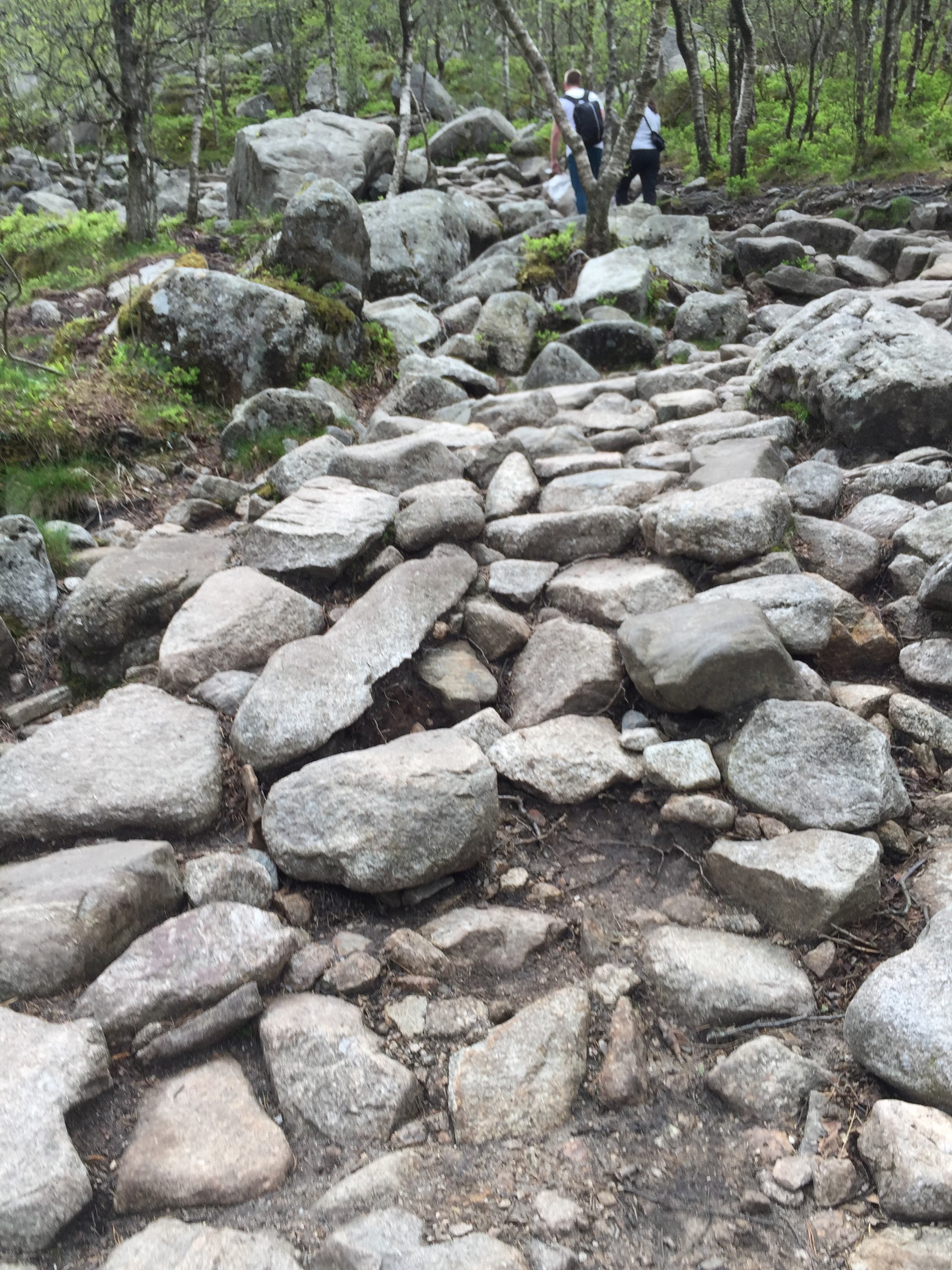 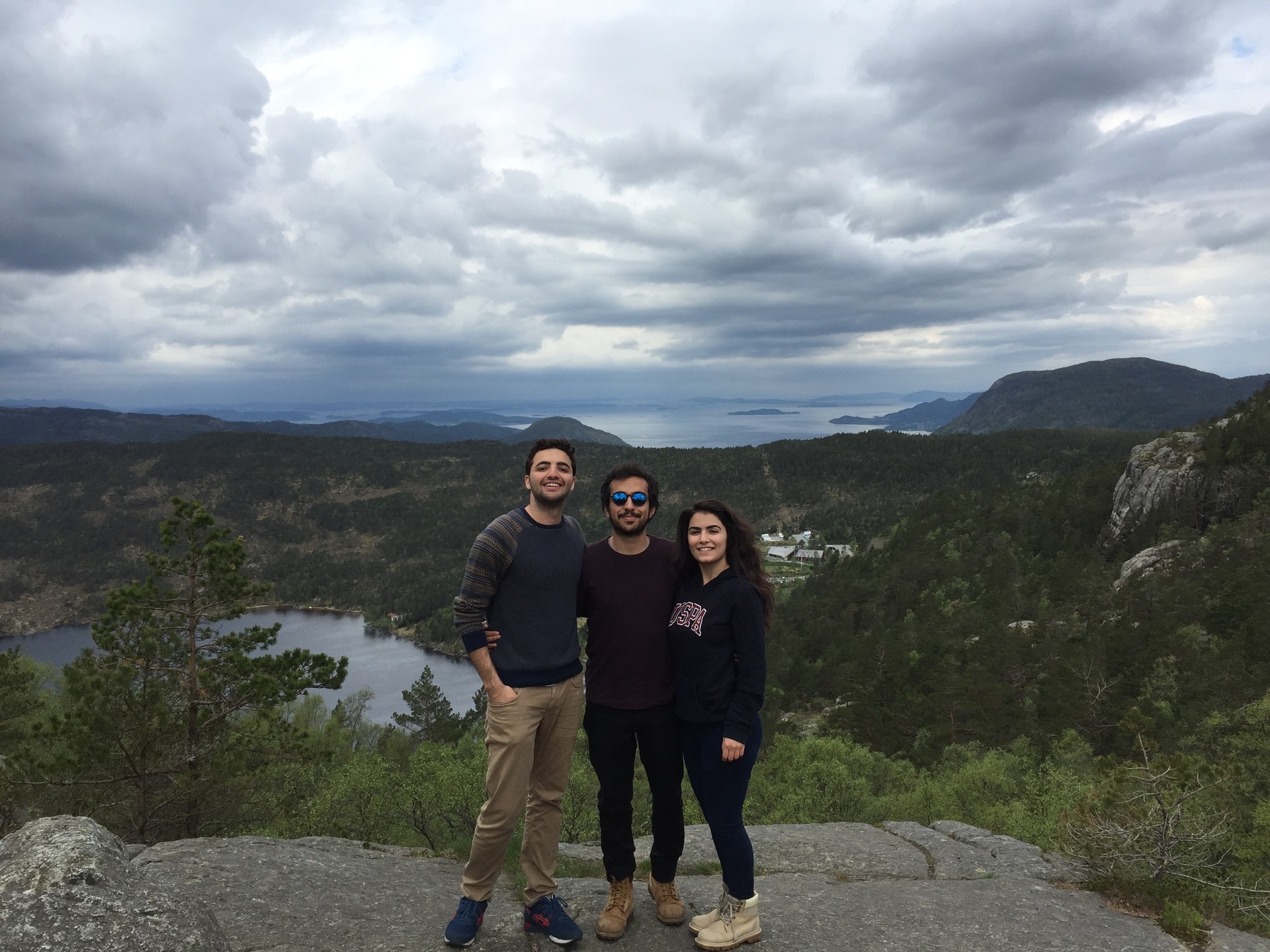 When we saw Pulpit Rock, we were all enchanted. We walked by the cliff at a height of 600 meters, and we were looking down on fear. Sitting on the edge of the Pulpit Rock, shaking your feet and photographing is one of the most invaluable things in this world! 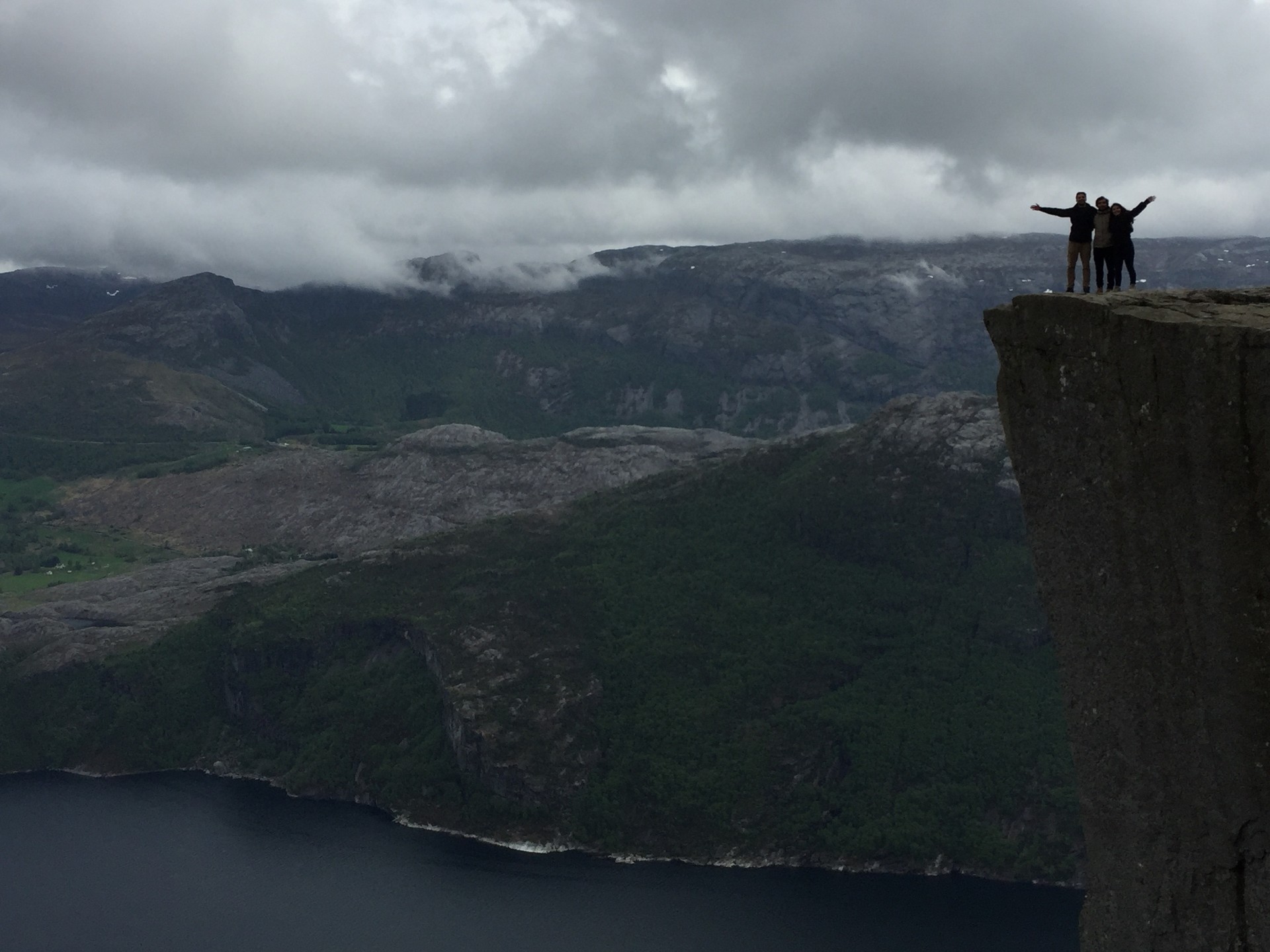 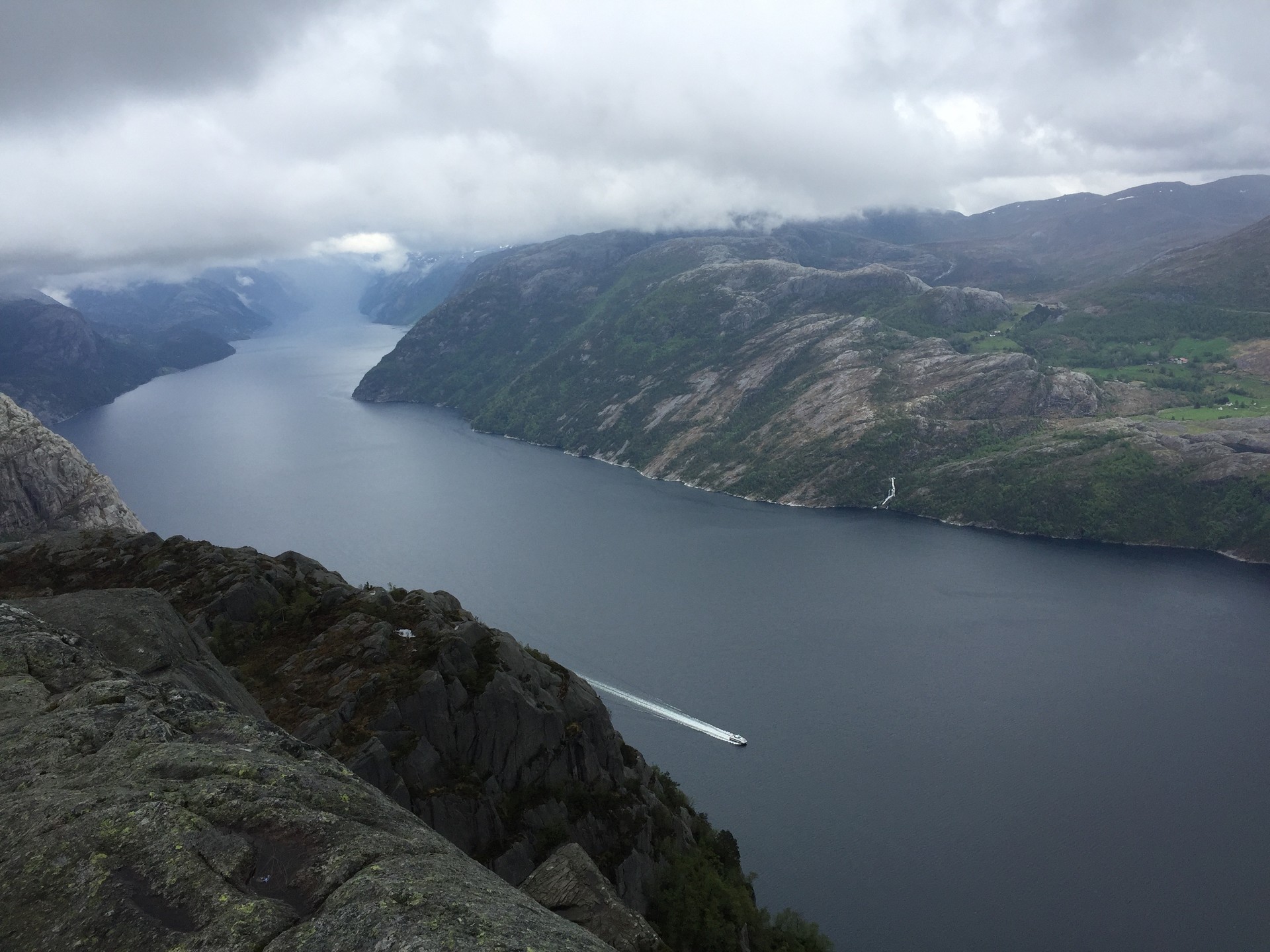 We went a little further up to eat our sandwiches and drink tea. Our landscape was like that: 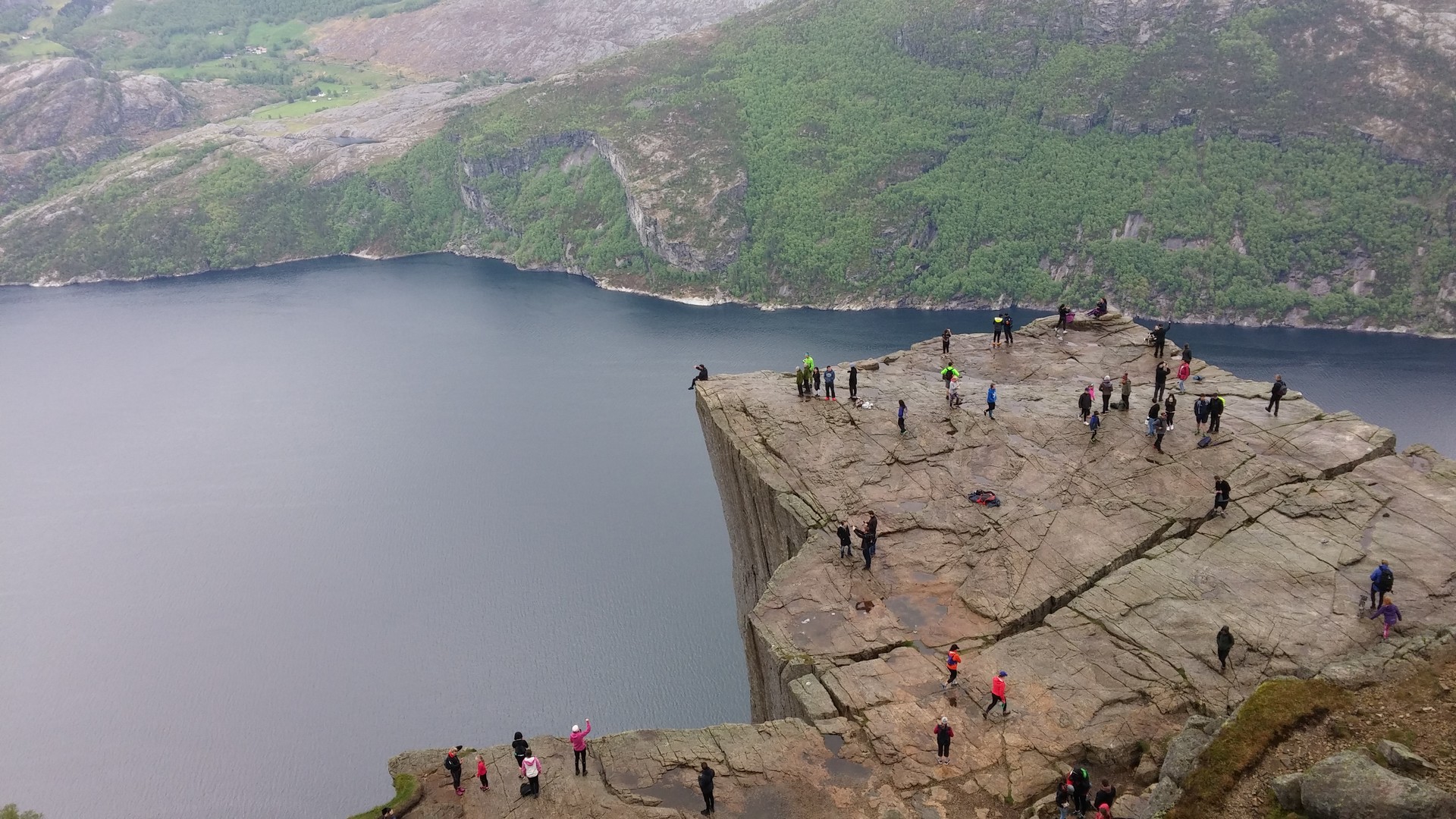 The best lunch ever!

We returned to Stavanger in the same way after spending 2 hours at the top. We stumbled upon our host while we were in town and returned to the island together. We went to a spot to watch the sunset on the island but the hour was still early, it was 9. 30 pm. We returned home and rested.

The third day was empty when the Kjerag plan was canceled. Our host suggested us to spend time on the island and to go hiking together. We, of course, did not turn this offer down. We arrived at the top of the highest mountain on the island after about 1. 5 hours of hiking. We were at the top of Pila. We ate our snacks, sat for a while, wrote our names in the notebook which was there and returned. 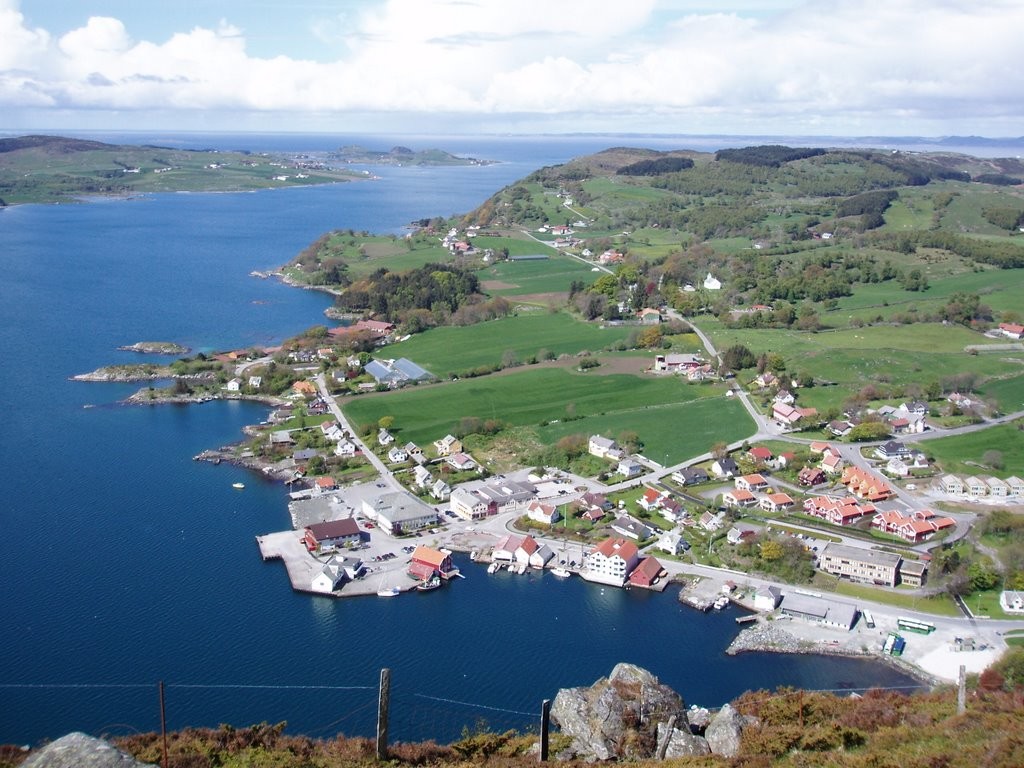 It was afternoon and we wanted to make BBQ. After buying some food from the market, we started to do it. Thanks to our host, we tried a few Norwegian beers while eating sausages and chicken.

From left to right: Ragnar(our host), me, Ceren and Yusuf. 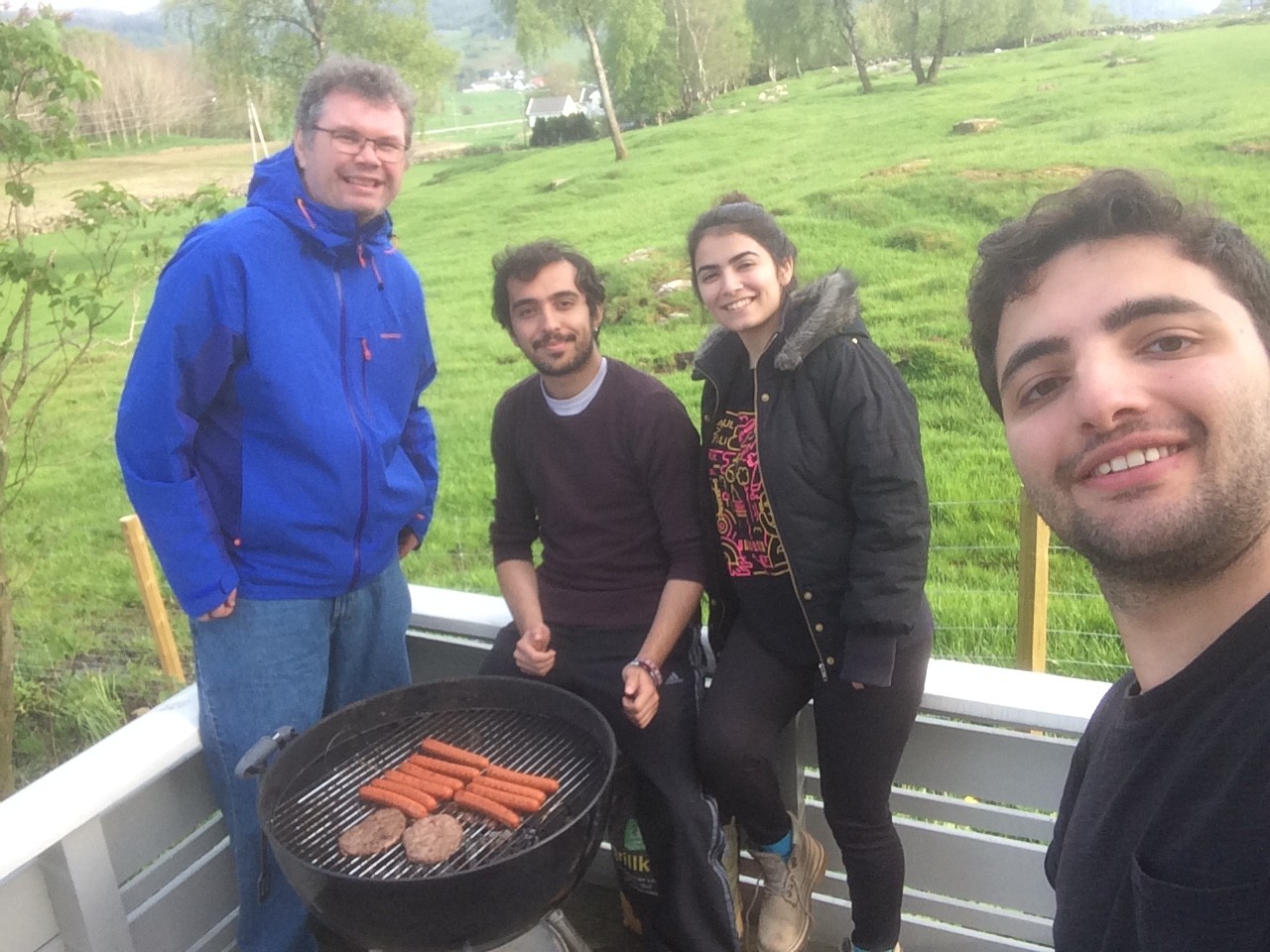 After BBQ-chilling mode, this time we went to watch the sunset just in time, and we met this magnificent view from 10 to 11 pm. 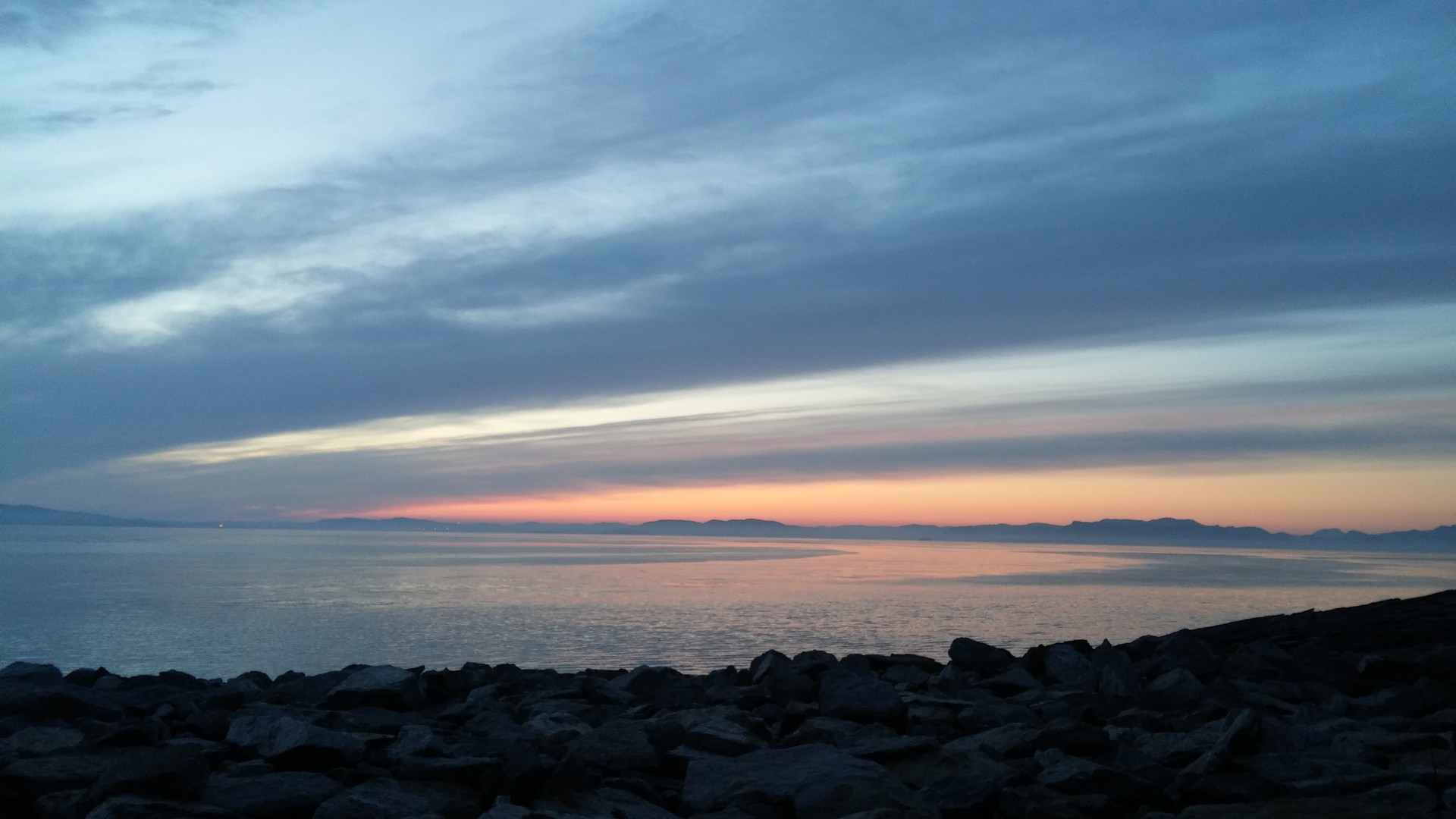 We were very tired, and we had to wake up at 6 am in the next morning. So, we packed our bags and slept immediately. It was the end of our Stavanger trip.

Let’s talk about my recommendations about Norway: