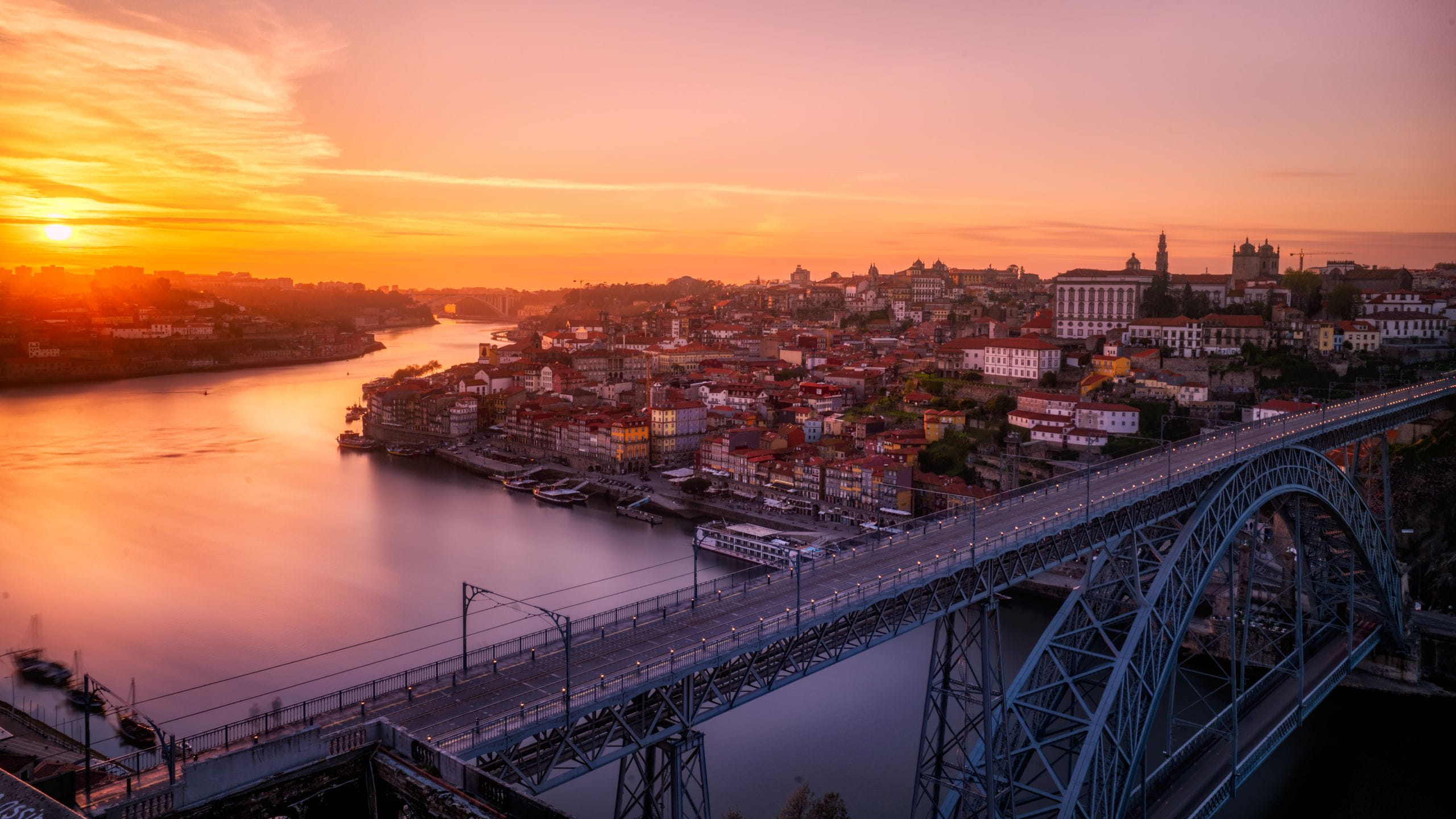 Photo by Everaldo Coelho on Unsplash

To be honest, Portugal is always seems too far for me and to be difficult to go to. It's because of the fact that both the plane tickets are expensive and the plane takes four hours from Poland. But one day we were bored in the room and when we checked the ticket prices for Portugal, we saw that there was a discount and we got it instantly. We were there from June 8th to 11th.

Our starting point was Porto. After the landing, we went from the airport to the city center by metro. First we went to the bus terminal because we had to go to Coimbra in the evening. We used Rede-express because our friend suggested it. The distance between two cities is about 1.5 hours and it costs 10 euros per person. If you want to leave your luggages, you have to pay a fee around 2.5 euros. But the staff was very friendly, we were pleased.

Now it was time for visiting the city. We walked from the bus terminal to the city center and when we arrived to the center,there was a free walking tour. We took the chance that comes our way and joined them immediately. Our first stop was the São Bento train station. As you can see in the picture, these blue frieze decorations have a large place in Portuguese architecture. It is possible to see even outside of the buildings. 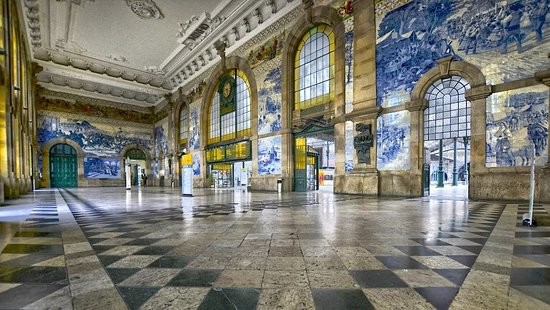 According to our guide, the construction of this building lasted 20 years. The funny thing is that after building was completed, they found that they forgot to add to the station the waiting room, the toilet and even the ticket sales point. On this story, our guide said the Portuguese people are very relaxed and unhurried people.

Our second stop was Dom Luis Bridge, Porto's famous bridge. This bridge was made by Eiffel, we were not surprised to hear it, and it was the longest iron arch when it made. From this bridge you can see the beautiful view of Porto. 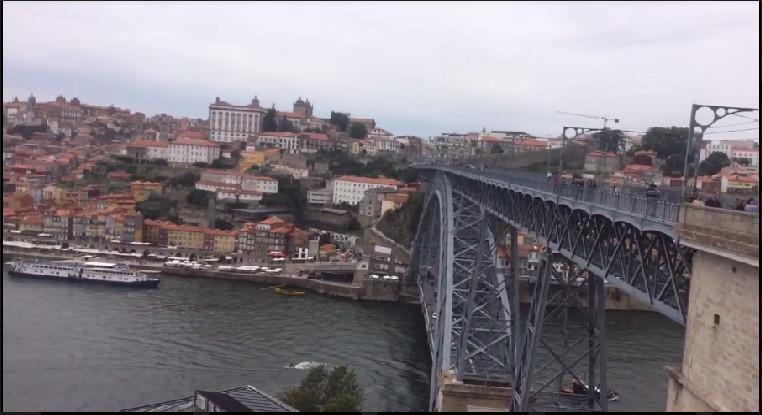 During the tour, we also visited the Church of São Francisco, Casa da Música, Church of Clérigos, Porto Cathedral, Bolhão Market, Avenida dos Aliados. Finally we visited Livraria Lello. This is actually a bookstore. It is a place that draws much attention due to the construction of its stairs. However, we learned later that the stairs were not real wood, only their appearance. You need to pay the entrance fee to enter which is 4 euros for each person. And it can not be said that there are so many English books inside, mostly Portuguese books. I know it looks very nice from the photographs, but if I said we have not been disappointed a bit, it would be a lie. 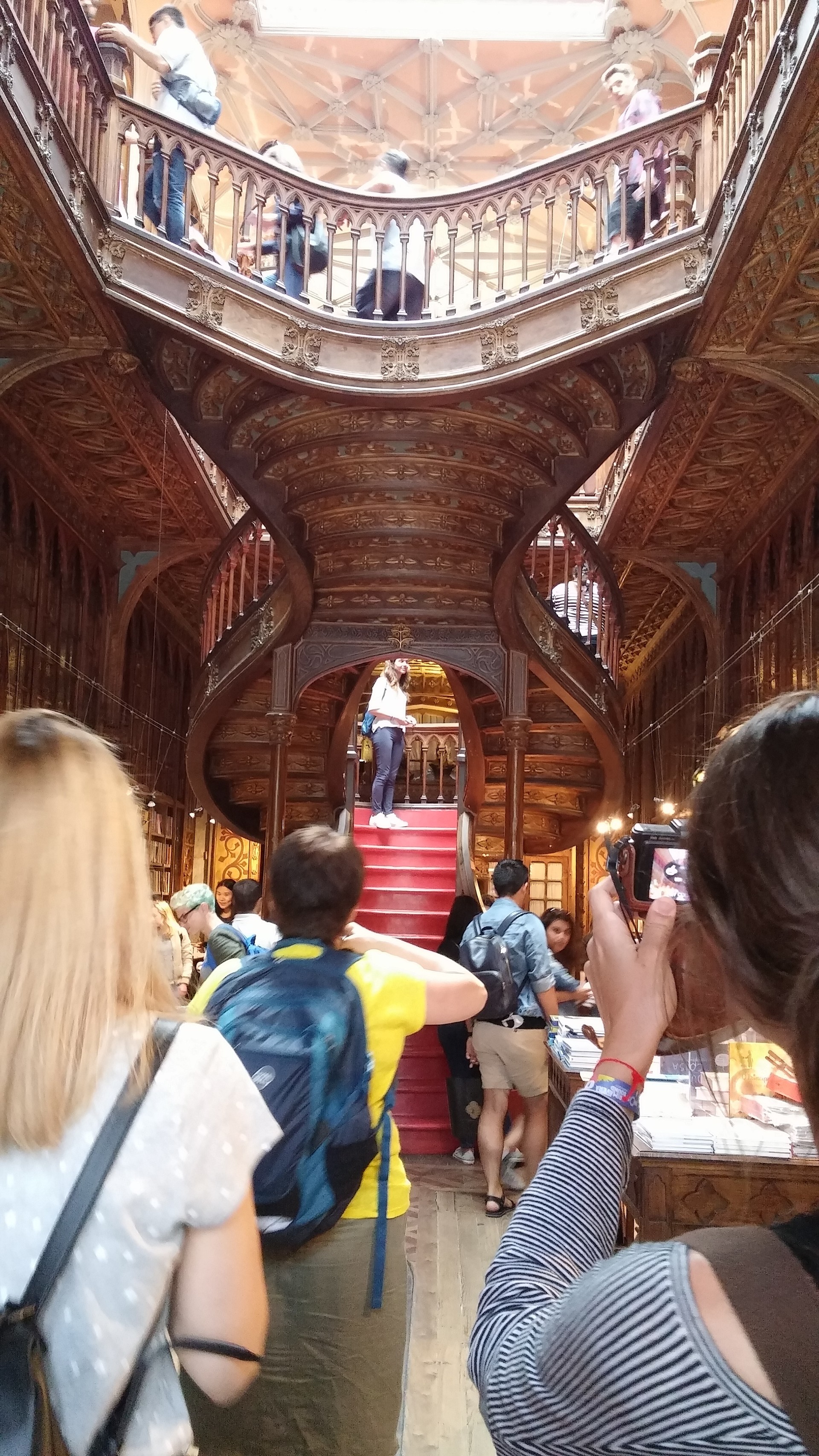 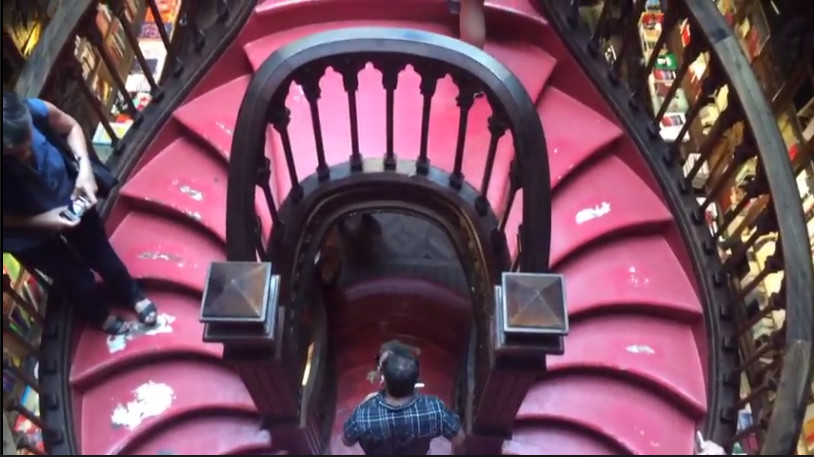 After we walked around the city, we decided to eat Francesinha because we were hungry for a very long time and we heard a lot about it. Francesinha is one of the most famous meal in all of Portugal, but originally it belongs to Porto. It was much different than we expected, but we loved it. It is really satisfying and tasty, especially if you are a big fan of meat. There are many kinds of meat in it and the beer sauce is used on it. But every restaurant has its own sauces. It is possible to find good one between 9-12 euros. But the most famous one is 19 euros and it is in the Majestic Cafe. It is known that J. K. Rowling preferred that café when she came to Porto. The decoration is really nice. 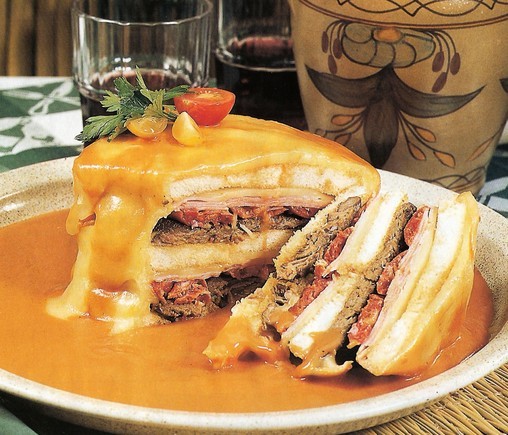 We did not return without trying Porto wine for sure. In Porto, you can find lots of wine cellars and you might join their wine tasting tours. Porto wine is really easy to drink and sweet. But this does not mislead you because the rate of alcohol is higher than normal wines. The prices are also quite cheap. We tried one of Ferreira wines and Offley Ruby Porto. After the wine tasting, we returned to the bus station and headed towards to Coimbra. We met with one of our friends who is on erasmus student in Coimbra and stayed in her flat.

On the second day we started to visit Coimbra early in the morning. Firstly, we went to Coimbra University. This university is one of the oldest universities in Europe and even in the world. This is the main square of the university. On the left you can see the famous library. 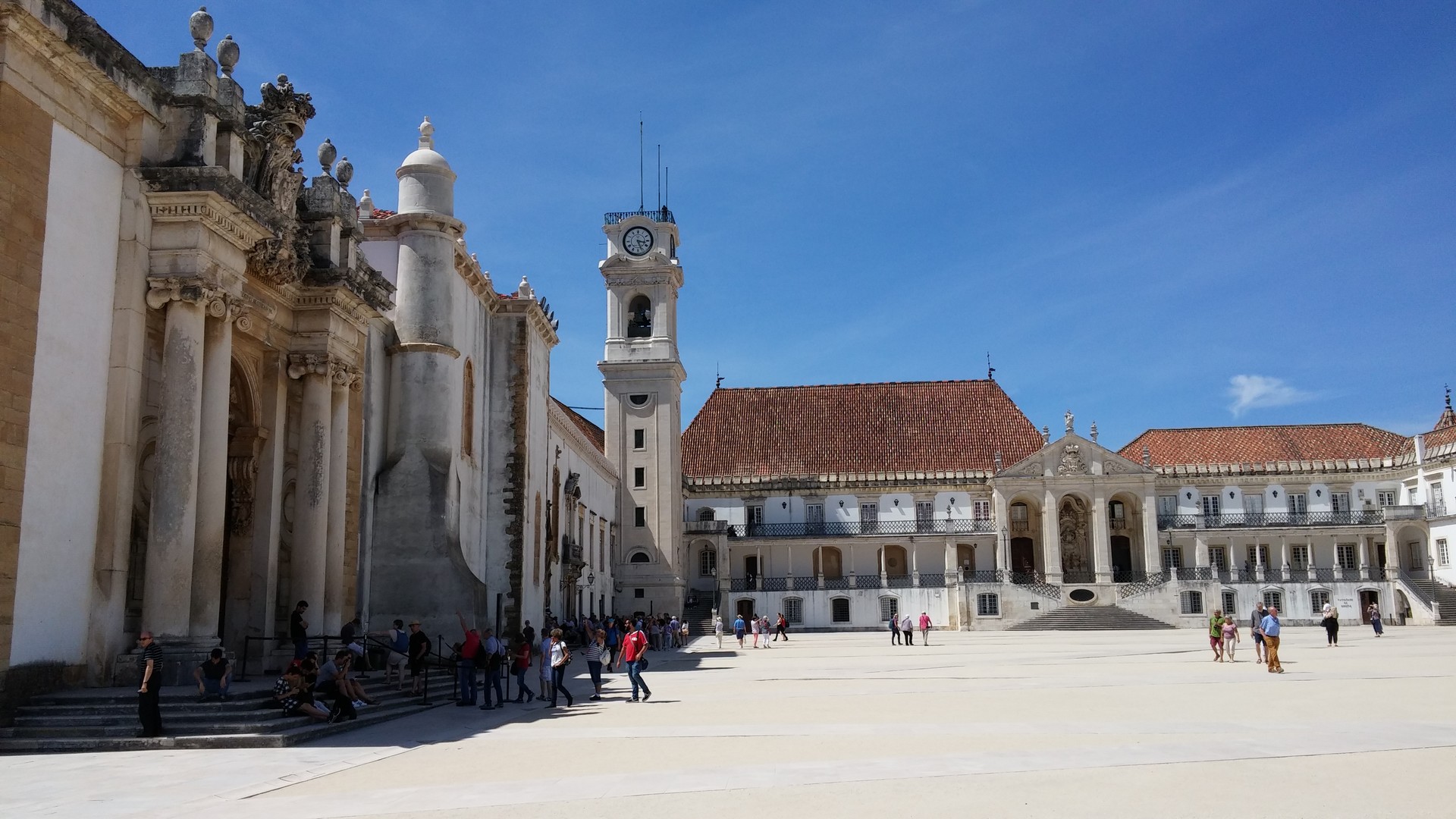 Inside of the library is one of the things must be seen. Original name of it is Biblioteca Joanina. 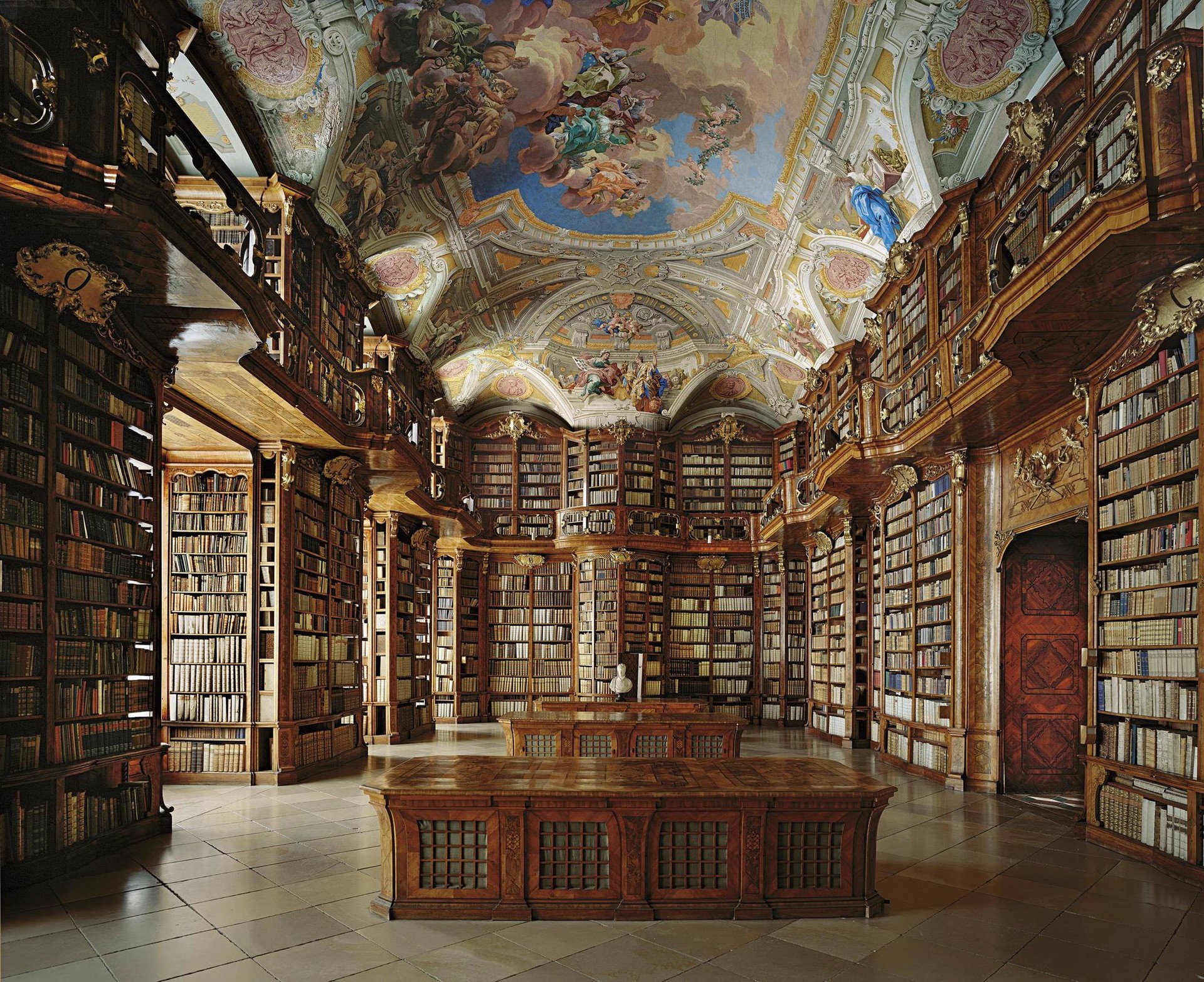 It is not surprising that such an old school has its own traditions. One of them is that the students have to go to the school with casual clothes and black cloaks. They must go through many stages, various competitions to deserve this cloak.

Then, we continued to visit the city. We saw the churches, the city center, the riverside. Coimbra is a small city but it has a friendly and warm atmosphere.

In the evening, we went to a bar which is called What’s Up Doc where erasmus students usually go and spend time. The drinks were really cheap, one beer is 1-1,5 euros, one cup of sangria is also around 1 euro. After that, we went to another bar which offers you to a free t-shirt if you drink its 6 shots in 5 minutes. You need to pay 7,5 euros for that shots but it includes liquors, absinthe, vodka and other alcohols. I was already motivated and took shots no more than 2 minutes and won free Coimbra tshirt : ) Our last stop was one club to dance. After dancing a few hours, we returned and slept.

In general, we can say that Coimbra nightlife is really colorful. It is held here at many festivals. For example, this is the right place if you want to take a shower with beer!

On the third day, we went to Lisbon by train in the morning. The distance between the two cities is  around 2,5 hours and the price for train is 15 euros. I guess price of bus tickets are almost the same with train tickets. After we got out of train, we walked towards the city center and we saw the Commerce Square. The city has a grand entrance. You can watch the ocean right in front of it. 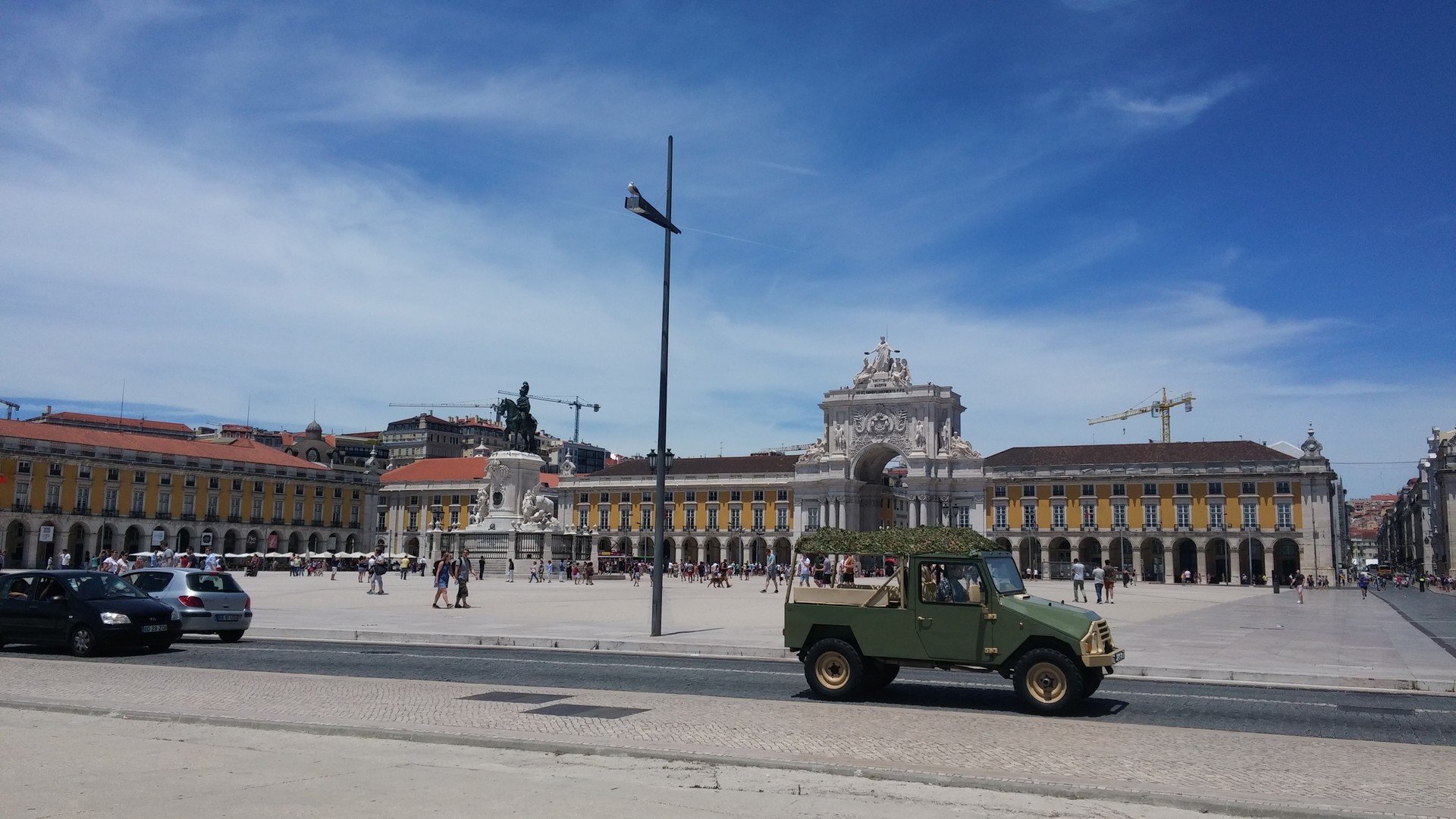 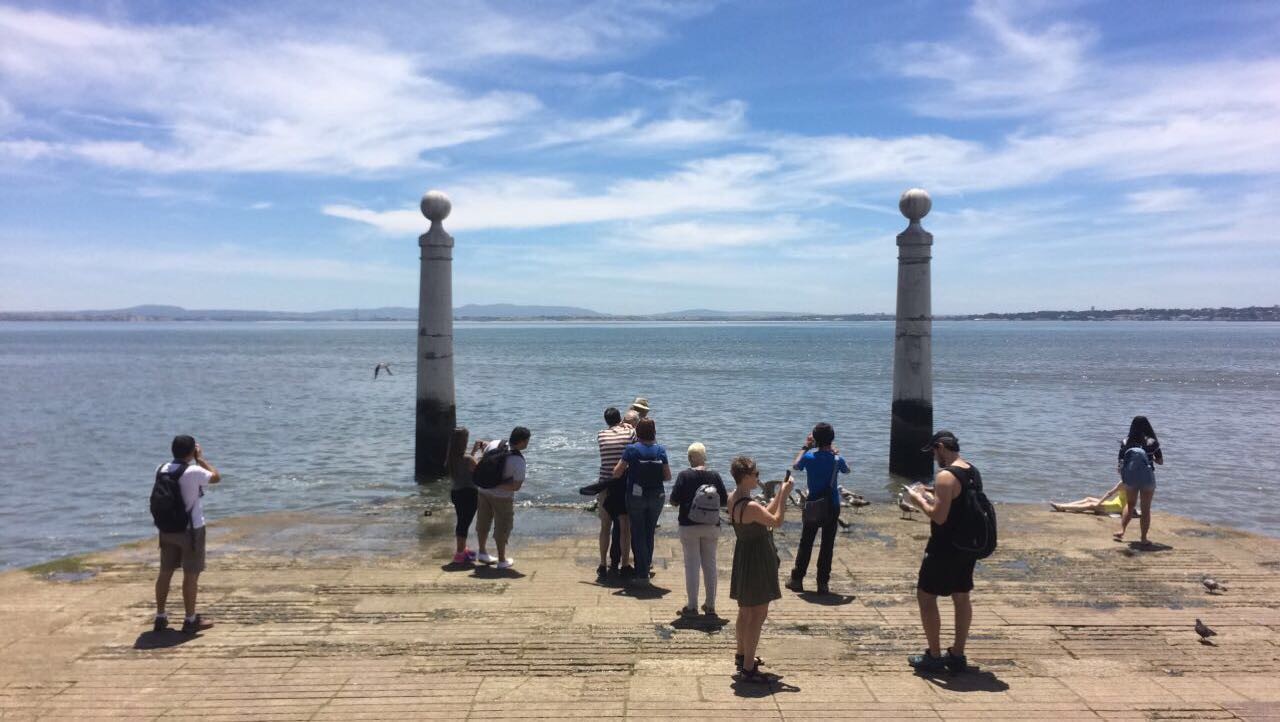 We walked every street here. It is possible to see the São Jorge Castle when you are on the top of the hill. If you continue to walk from the city center, you can see the Camões Square, Cathedral, Restauradores Square, Àguas Livres Aqueduct, Parque Eduardo VII.

We went to Belém after visiting that places because we heard that, Belém is one of the most beautiful districts in Lisbon. We meet with our friend from erasmus in front of Belém Tower. When we arrived there, this landscape welcomed us: 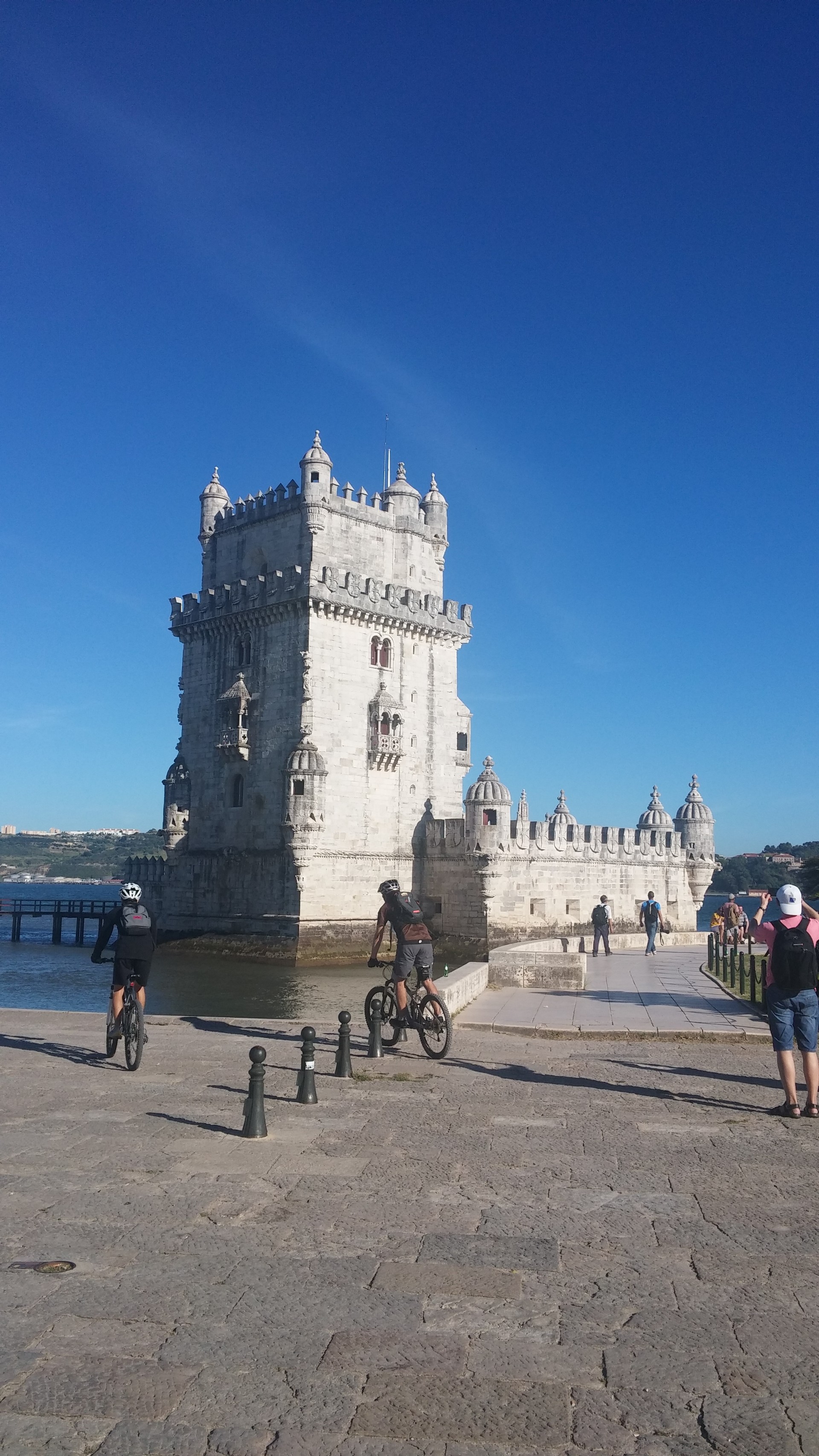 When the Belem tower was first built, it was in the middle of the river but now it’s very close to the land. You can enter the tower if you’d like to pay 5 euros.

We wanted to taste Pastéis de Belém which is very famous. For this, we walked along the coast. There were also places to see on the road. One of them was Monument of the Discoveries. This structure was made in honor of Portuguese explorers and scientists. You also have a chance to watch the Lisbon view from the top. 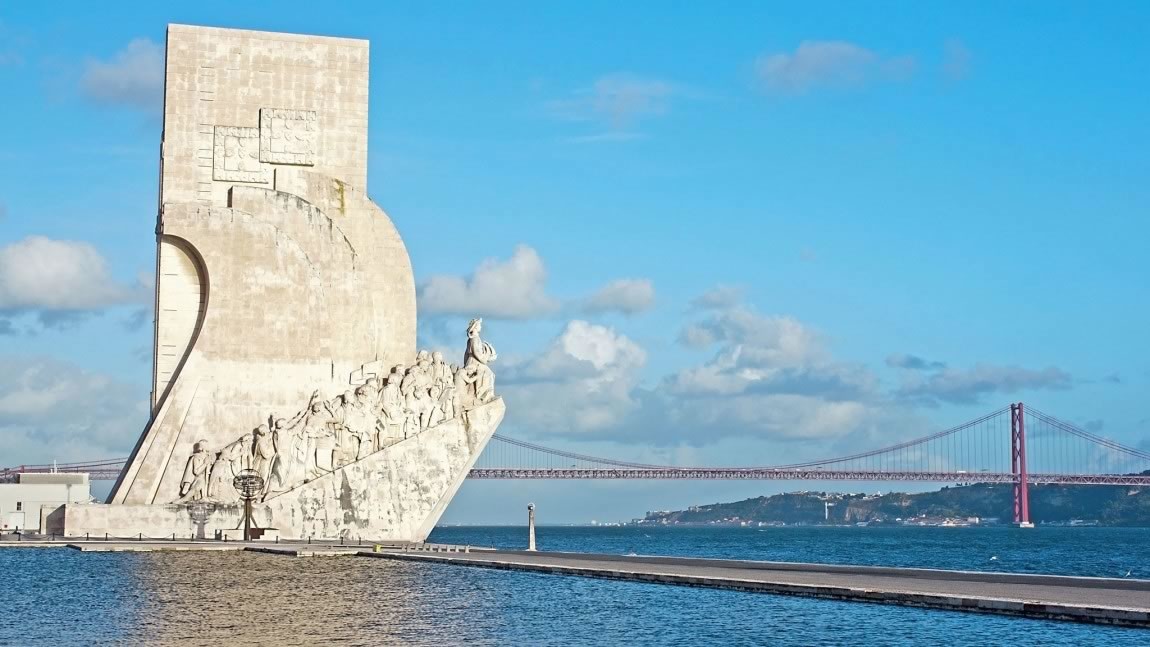 You can also see the 25th of April Bridge, also known as Salazar Bridge, in this photo. This bridge is one of the symbols of the city. We also loved it because it reminded us of Boshphorus Bridge.

When we continued on our path, we saw a magnificent and grand structure. We learned that this is the Jerónimos Monastery. Unfortunately we did not have time to get into it.

So, we entered the queue for Pastéis de Belém. Yes, you'll probably see the queue here, but they work pretty fast. So you do not have to be afraid and it is definitely worth to wait! 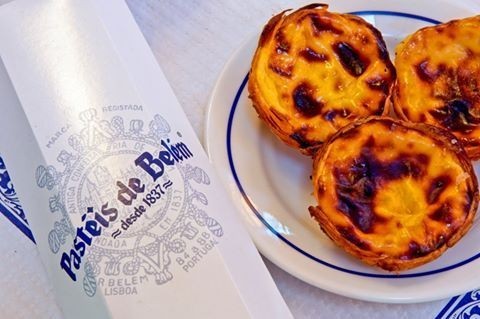 We went to a friend's house to spend the night. When they learned we wanted to spend our last day on the beach, they offered us to go to Cascais. So, we decided to go there the next day. We finished the day after watching some local Portuguese dances and talking about politics, festivals in Portugal, student life etc.

In our 4th and last day, we woke up early for Cascais. We used metro for going to Cais de Sodré and then train for going to Cascais. Train is the most convenient option. You need to pay around 5 euros for two-ways tickets. There are too many beaches around and you can choose what you want. Sunbeds and umbrellas are not free. But you don’t have to pay to take a shower. 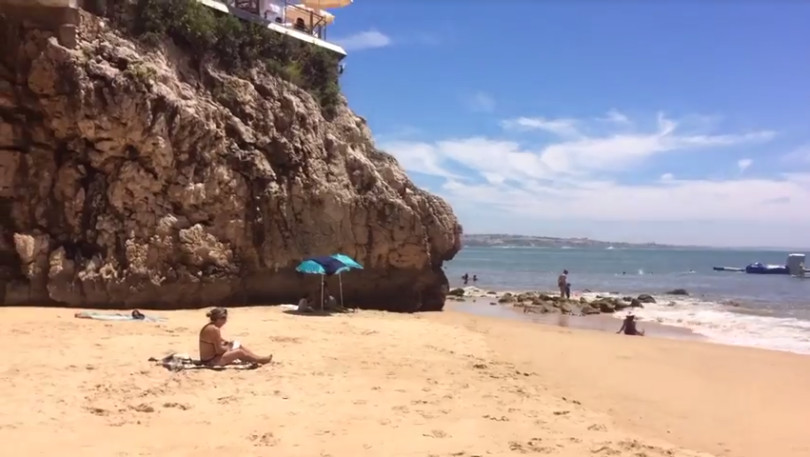 We preferred to sit on sand. Cascais was like other The Portuguese coasts, extremely rough, because of huge waves. That’s why it’s difficult to swim. However, we spent all day there and then went to airport for returning back. It was the end of our trip. 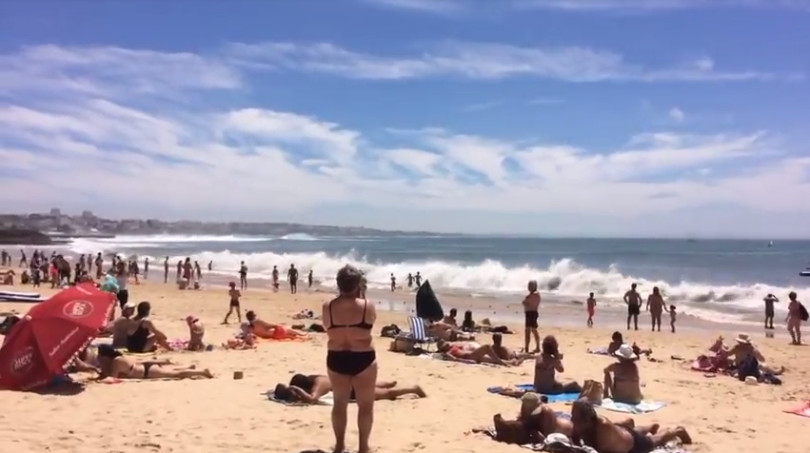 If you ask my tips&tricks for Portugal, here they are: