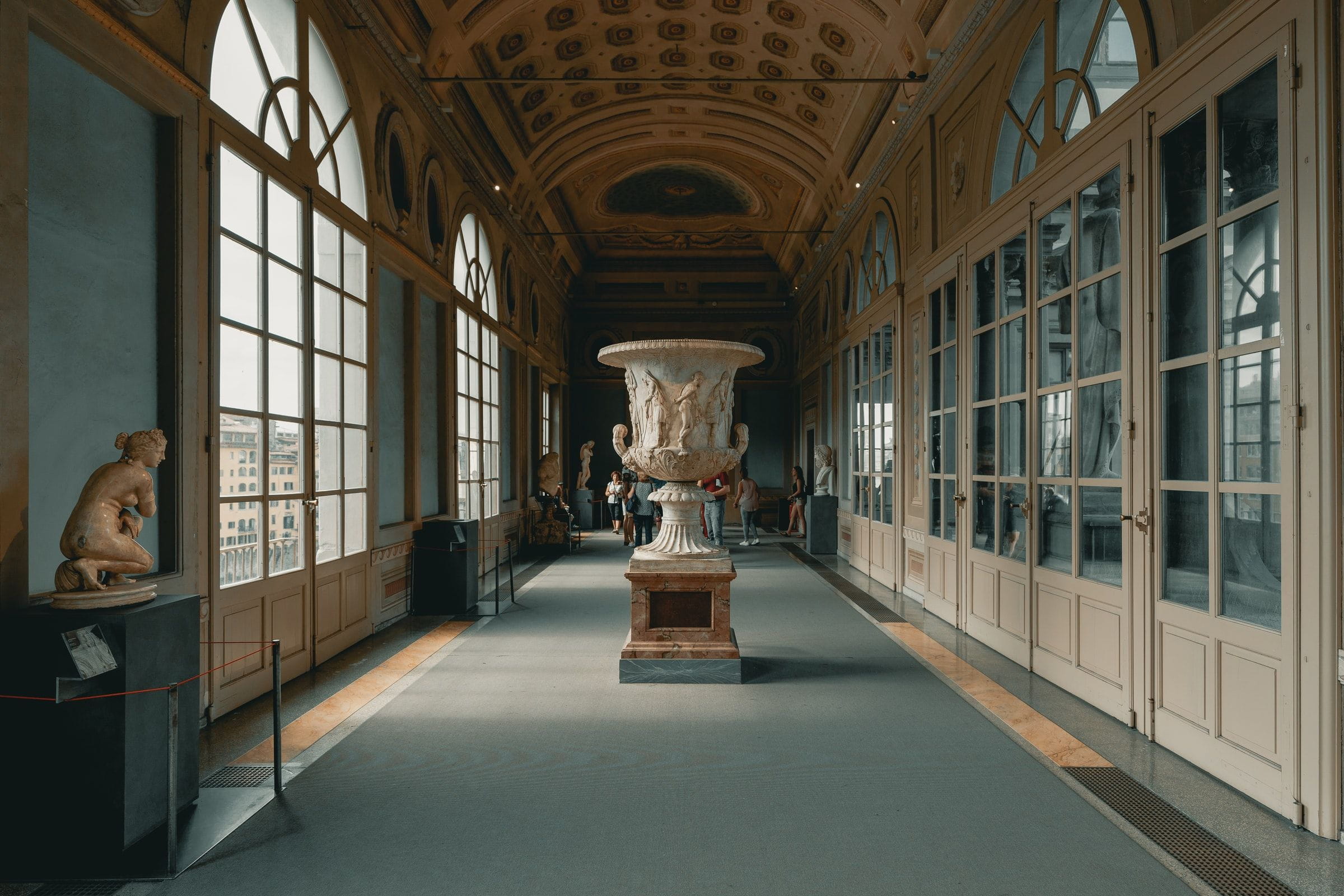 Photo by Clay Banks on Unsplash

It was my 3rd time in Florence, and I was there for 4 days this time, between June 18–22. No matter how many days you spend in Florence, you never get enough of it! It's just a fairy-tale city. Before diving into this new post, I'm sharing the link of the previous post which also has lots of information about the city.

Let's start with transportation. How can you go to Florence from Berlin? I tried two options:

Unfortunately, the latter cost me to spend one extra day in Zurich because my Berlin flight was canceled. At least Swissair booked a hotel, gave me vouchers for shuttle and meals, and booked another flight for the following day.

My main purpose for this trip was to attend Metallica's concert on June 19th. Firenze Rocks is an event that took 4 days this year, it was in a hippodrome, and according to their announcement, 200k people participated in 4 days! We joined only on day#4 and have seen Greta Van Fleet, Jerry Cantrell (founder of Alice in Chains) along with Metallica.

I should admit that waiting under the sun, ~35 degrees, from 1 pm till 9 pm was a bit exhausting. It was pretty fun and worth though! And it was my first pogo dance which was a bit extreme, haha. Metallica is old now, end of their 50s, but it doesn't mean that they lost their energy. It's still there, and they said they have been giving concerts for 41 years! As I said earlier, I was there for 4 days, and the concert took only one day. On other days, it mainly was re-visiting some places, chasing the best pasta and pizza in town. However, I finally had a chance to visit the Uffizi Gallery! Thanks to its rich Renaissance collection, it's definitely one of the most famous museums in the world.

Instead of taking an audioguide (audioguides become overwhelming for me when I don't know what I really want to see), I preferred listening to this podcast. Here are the random notes about the gallery: More paintings can be found here. Another important thing is that most of the paintings were religious, painting Madonna and the child, Jesus, angels, etc. However, these all changed with Renaissance.

The painter tried to create depth and painted people and horses in different sizes from the viewer's perspective. In the beginning, it looks good. But many things are wrong:

The Venus sculpture might look familiar. Because it inspired Botticelli, but let's talk about it a bit later. These sculptures are from the ancient Roman and Hellenistic eras; some are 1500–2000 years old. One of the exciting things about this painting is that researchers found more than 130 different types of plants! They were all painted as they have been in nature!

This masterpiece was the very first large-scale canvas produced in the Florentine Renaissance. Source

It was the first time after 1000 years that the human body, mythological figures, and characters (except religious figures like the crucifixion of Jesus, etc.) were depicted naked. In that period, nakedness had always been interpreted as pagan stuff. But Botticelli thought that physical beauty was a way of appreciating God. This thought was adopted by other Florentine and Renaissance artists, and that's one of the reasons why these two paintings were revolutionary at that time.

aka The Holy Family

As you can see, figures look like sculptures, and they’re not that realistic because of that.

Additionally, he helped his master Verrocchio's the Baptism of Christ and made him upset because Verrocchio said that a 14-years old boy drew the most fantastic angel face he has ever seen. This is the angel:

He was also a scientist and it’s possible to see scientific details and geometry in his paintings. Take a look at Annunciation:

In this masterpiece, the angel's wings, landscape/tree/flower details, the folds of clothes, the marble table, and all other stuff show Leonardo's style very well.

You can understand mathematical perfection better when you see his unfinished Adoration of the Magi. There is a pyramid at the center (from Mary's head to the painting's bottom) and a circle (whole fans are in half circle).

Michelangelo, Raphael, and Leonardo lived in Florence at the same time. It's hard to imagine how fruitful and artful those times were for Florentines. The funny thing is that Michelangelo didn't get along well with Raphael and Leonardo. He blamed the former for plagiarism.

We finished the top floor. But it's not the end. There are many more things to see on the top and second floors. But I'll finish Uffizi part with Caravaggio: It was sent to Medici's family as a gift.

I was impressed by many other artworks, but I tried to select only the most famous ones in this post. I'll add many reference links at the end so that you can see and read more.

The top floor also has a fantastic view of Ponte Vecchio and the Arno River. Don't forget to spend some time checking it out!

When you pass Ponte Vecchio and go straight, you reach Palazzo Pitti. It's another museum that you could visit during your stay. Unfortunately, I didn't have enough time to visit it even though I had a combined ticket for it. Instead, I visited its garden: Boboli Garden. When you see its map, it looks like not that big, 10–15 mins from one side to the other side, yet it's pretty big! There are fountains, sculptures, many trees, gardens, and a ceramic museum. You also have a lovely view of Florence! If you go there at noon, take into consideration that it might be extra tiring. Because it's not level, you climb up and down many times.

This was designed for the Medici family in the 16th century. Am I surprised? No, not at all… This garden also inspired many other European gardens.

You can go there with some food and drinks. Enjoy the garden and view, and picnic there.

In the previous post, I mentioned about one famous sandwich place: Panini Toscani. On this trip, I have learned that it's not the only one. There are many more options, and it's a good option for lunch: All'Antico Vinaio (the queue was too long, so I couldn't try it), Amici di Ponte Vecchio (I'd recommend their #2018 sandwich).

Friendly, tiny pizza place: I'PIZZACCHIERE. Their honeymoon pizza was very delicious. You can stop here while you're going to the Piazzale Michelangelo.

Okayish pasta place: Trattoria 4 Leoni. I've tried pear ricotta Fiocchi, and it was unique and tasty. But my brother-in-law ordered pasta with tomato-basil sauce, which was just okay.

Ice cream: Venchi. It's a franchise, and you can find it in almost every corner.

Breakfast/coffee: Caffe Rosano. Their specialty is tiramisu pancake. They also have a very warm heart:

Cocktail: Narciso Bar. Our hotel had a rooftop restaurant and bar, serving classic + special cocktails there. You can enjoy your drink while enjoying this view: I'll finish the post by suggesting watching the sunset from Piazzale Michelangelo:

Florence offers many more things than I have written in the two blog posts. I think I can go there again and again and I'd never get bored. In my next time, I’m planning to visit Accademia Gallery, the main cathedral, Galileo Museum.

There was one thing different for me this time: I compared Florence and Italy with mostly German cities, especially Berlin, not with other European cities or Turkey. I actually always had Berlin in mind when I liked or disliked something about Florence. Honestly, it looked a bit disorganized regarding transportation systems, with lots of ragged buildings. Also, the English speakers were fewer than I was there last time.

Final note: If you plan to visit it in the summer, don’t forget to stay hydrated! Do you want to see how hot it was? My phone gave this warning for the first time: